Visions 2050 – Lifestyle and the City

Playing catchup now as the last 2 months have been a blur of classes and assignments I’d just haven’t had the time to blog! Sometimes, I seriously despair of my schedule but I like to say that being busy is a good thing! I just need to craft some time somewhere to blog.

I was curious to hear about the 2015 Hong Kong & Shenzhen Bi-city Biennale of Urbanism \ Architecture with the theme of Visions 2050 – Lifestyle and the City that sounded fresh and innovative. It was held from 11 December 2015 – 28 February 2016 at Kowloon Park. I went to see it in January this year, and I have to say I felt underwhelmed by the exhibits.

On a better note, there was an exhibition (part of the event) at the Hong Kong Heritage Discovery Centre that was pretty interesting. It was mostly photographs of Hong Kong’s architecture with a few model exhibits and a video screening area. There were some photographs I really liked so I wanted to share them here!

(On another note, it was my first time in Kowloon Park and… I didn’t like it. If you’re looking to go to parks in Hong Kong, I would much highly recommend Hong Kong Park in Admiralty instead.)

The Chinese title of this piece 屏風樓 literally translates to ‘Screen Towers,’ referring to Hong Kong’s tightly packed buildings that block air flow, sunlight, and views. The superimposition in the image addresses the need for improvements in Hong Kong’s housing conditions.

This area is so beautiful. The interlocking building structure looks very cool, and that’s Tamar Park in front of it. The Central Western District Promenade is just ahead, and it’s definitely a great place to hang out and slow down in busy Hong Kong.

I need to see this for myself. THR350 is a nine-storey private residence building in Wan Chai, and its design is inspired by the idea of barren rock and waterfall. Barren rock is portrayed in the straight-lined glass façade of the building while the idea of a waterfall has been transformed into the form of three stacked ice cubes that contains a sculptural staircase.

And of course, a classic aerial view of Hong Kong. I’m sure any Hong Konger can see which island this is! (It’s Kowloon with a bit of Hong Kong Island peeking in.) 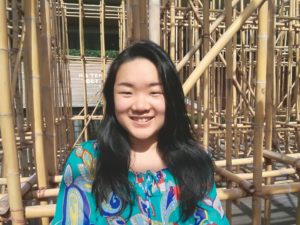 I'm Ellice Wu, an art history graduate going places to see art in Singapore. Finding art in the everyday, whether that’s in a great art exhibition or a gorgeous cityscape, Wording Art is a space to put pen to paper on scenes and images that I see and love.

New in shop: 'Night by the Esplanade'! With Nation

How has your week been going? ☀️ I'm finally a

Took advantage of one of the recent free weekend a

A History of Western Art
by Laurie Schneider Adams

Between State and Market: Chinese Contemporary Art in the Post-Mao Era
by Jane Debevoise